“OK Google, Find A Bike Accident Lawyer Near Me.” 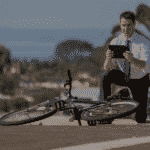 With the beaches closed, people home and the sun coming out in San Diego, bicycle and pedestrian traffic has significantly increased on frontage roads. If you’ve been injured in a bike accident and are looking for an injury lawyer, the San Diego bike accident attorneys at Phillips and Pelly, with three locations and statewide virtual office, are here to help and are near you.

Traditionally, most people think of a bike accident claim involving a car vs. bike. However, there are others viable bike accident injury claims such as when another bicycle rider or pedestrian causes an accident, in which case the negligent party’s homeowners insurance generally covers the claim.

In the event of Orthopedic injury such as broken bones or torn ligaments after a bike accident, the attorneys at Phillips & Pelly can arrange medical care with highly skilled orthopedic doctors for the client. This means the client gets the immediate benefit of diagnosing, treating and documenting injuries that were caused by the bicycle accident. In addition, it’s critical to full case analysis to understand the future prognosis, costs and likely residual injury. All of those factors, in addition to any more, go into determining the settlement value of a bike accident claim. This partially answers the question: “What is my bike accident case worth?”.

In other bike accident cases, the rider may have struck his/her head which can result in dental injury, facial injury and/or traumatic brain injury.

Sometimes, evidence of a traumatic brain injury (also known as TBI) from a bike accident will appear on a brain MRI, other times it will not but the effects of the bike accident TBI may show up in behavior, speech, memory, mood and other cognitive behavior. As these types of injury often cannot be “seen” on a medical film, it’s very important to properly document, quality and maintain evidence that will be admissible at trial. The bicycle accident lawyers at Phillips & Pelly will work with you to properly document the evidence necessary.

After a bike accident, don’t rely on the insurance company to be your advocate and look out for your best interest. In fact, there is an inherent conflict of interest, For you the bike accident victim, the right thing is to consider all aspects of recovery and advocate for you. For the insurance company, the motivation is to collect more in premiums than payments, hence minimizing motivation to fairly compensate claimants.

Don’t let the insurance company make things worse by walking your into their “traps” designed to minimize claim value.

After an injury bike accident, contact the bike accident lawyers at Phillips and Pelly via live chat or calling 858 794 1700.